In a real business operation, employees can access multiple doors within the company. To improve security, restriction of access need to be taken into great consideration. Managing access to key operational areas and restricted places is assuming increasing importance for organizations everywhere, from small entrepreneurial companies to large corporate enterprises and government bodies of all sizes. Even the most neutral organization now recognizes the danger of a door security breach. With the Ingress software in place, administrators can easily limit the door access of unauthorized employees at different time period for different doors and this can all be done under the Access Level tab. 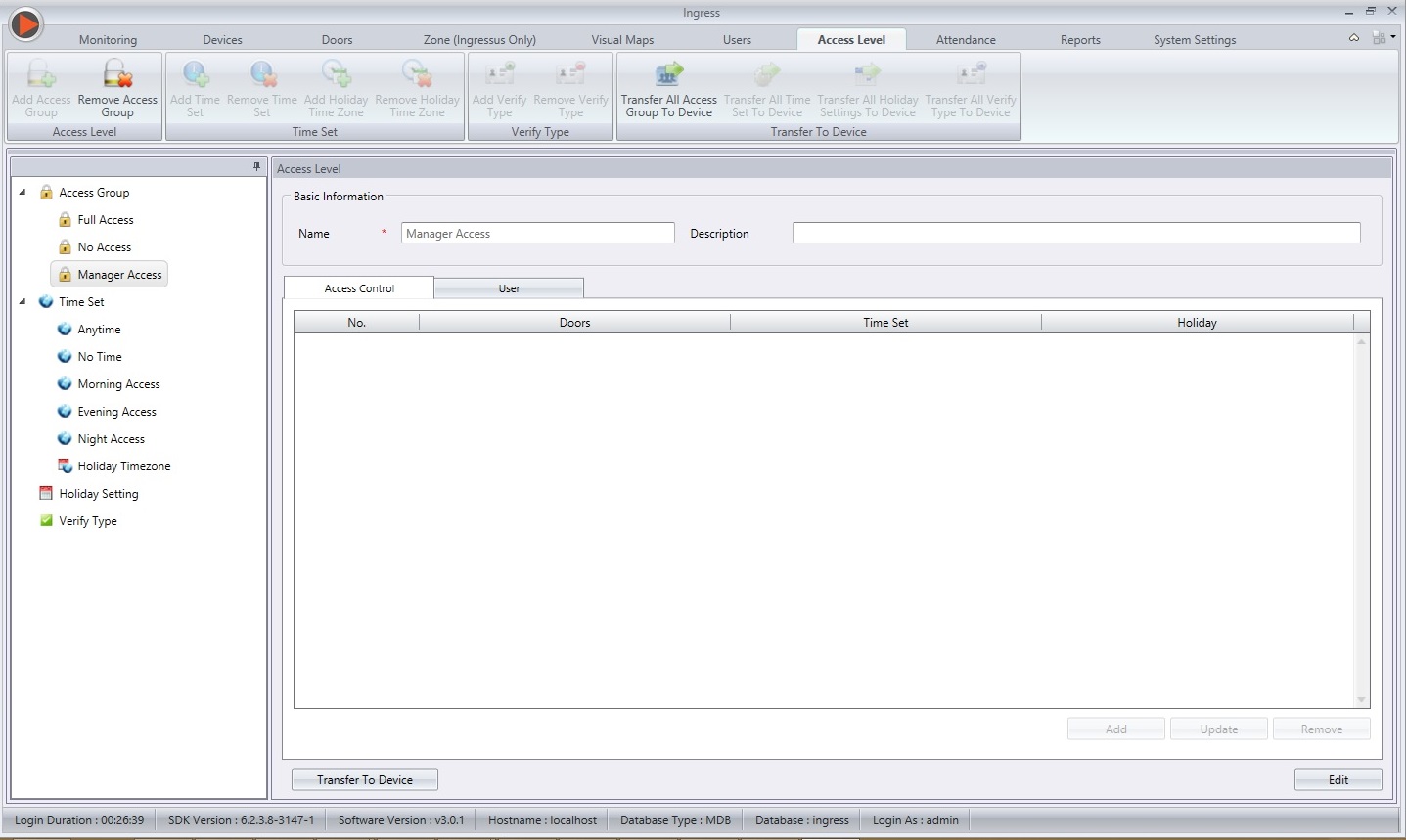 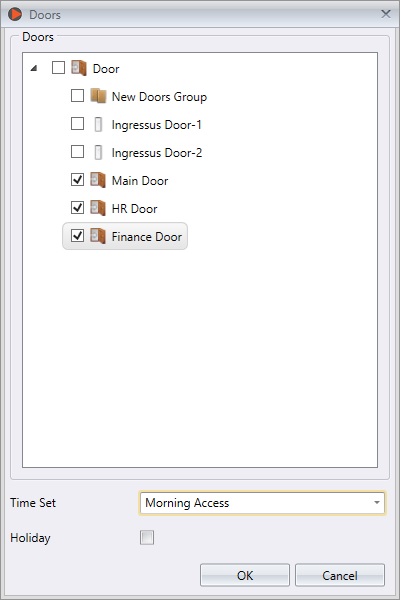 Ingress will display the list of doors under this Manager Access Group. Check the checkbox for HR Door, followed by clicking on the Update button. Now you can select the Time Set to apply to this door, for example Evening Access. 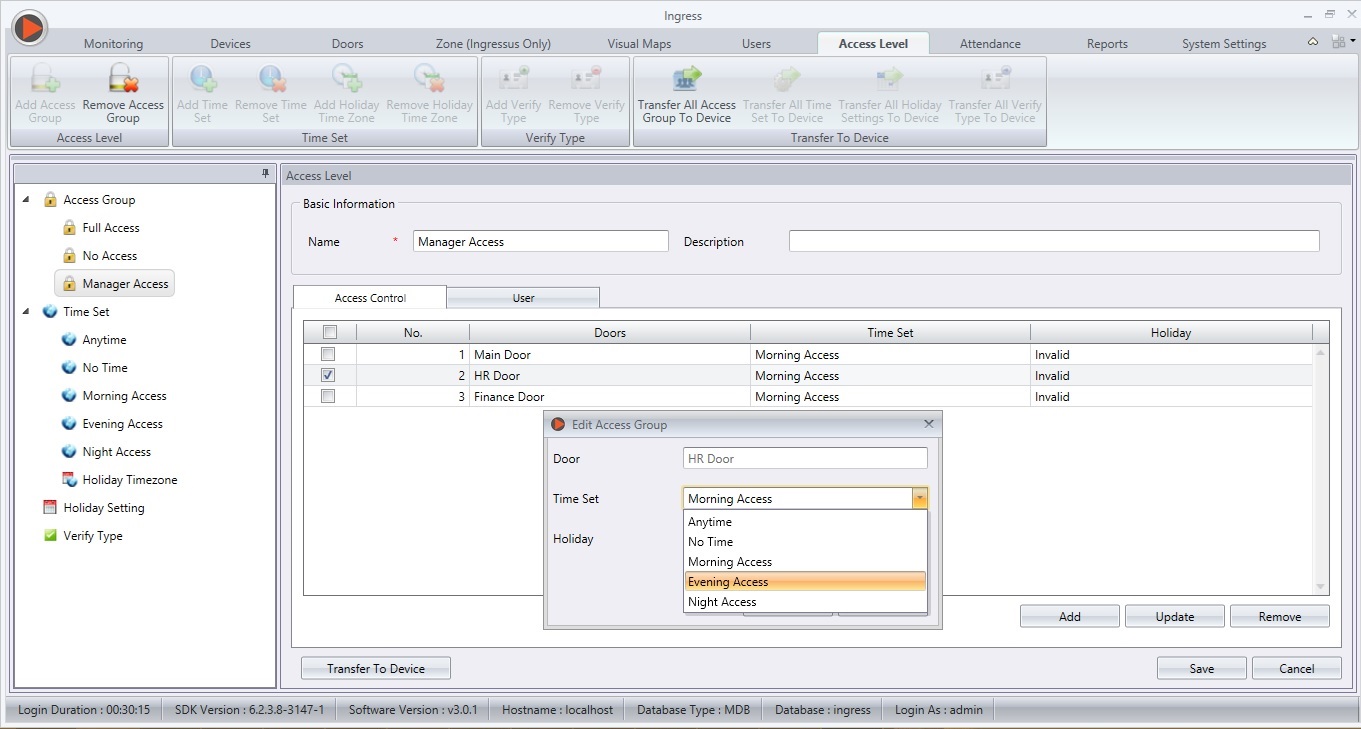 Finally, finish the control access setup for different doors with different Time Set. The last step is to select employees to be included within their respective groups. Click on the User tab and follow the on-screen instructions to complete the settings. 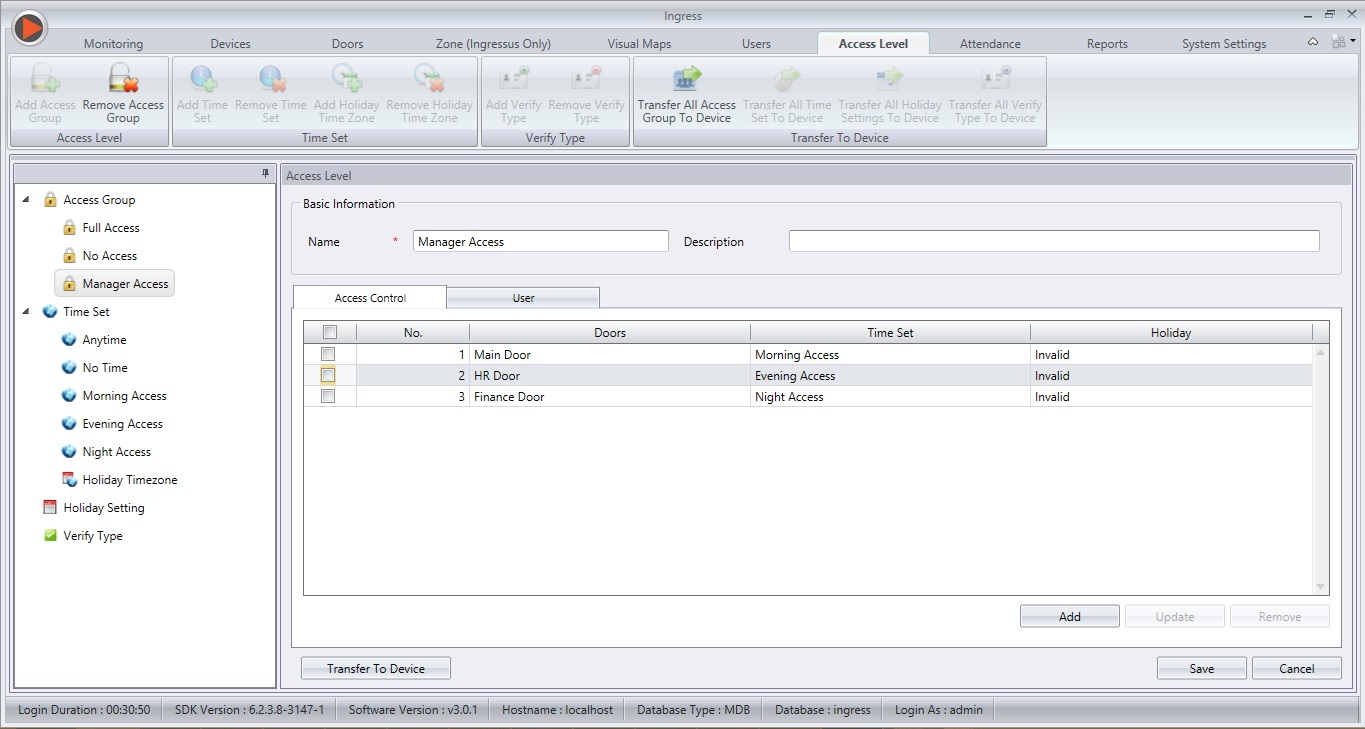 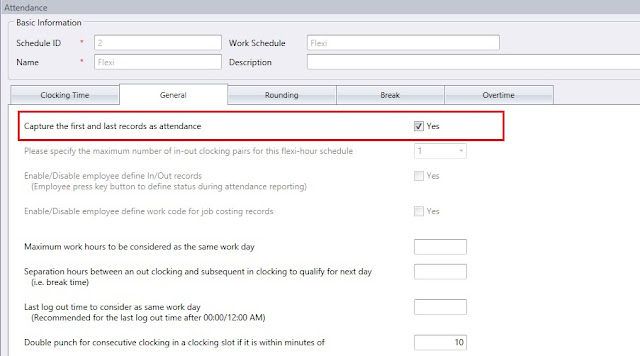 Many access control softwares provide real time monitoring as a standard security feature. Security personnel often spend their time in front of monitors to monitor real-time events and video footages to guard against theft and maintain the security of the premises. Prior to the advent of electronic security systems, this was one of the most basic human-dependent security monitoring method that utilizes the traditional security model.  This led to human errors and incompetence playing a major role in the security concerns of the access control system. Thus, a good access control system comes with an integrated automatic notification system to inform the security manager in case of emergencies or abnormal scenarios.

Ingress can work with your SMTP email server to send notification emails to the person in charge of security or the system administrator. You can define the types of abnormal scenarios detected by Ingress, for example break-ins, door breech and etc to inform the security manager.


First of all, you must setup your SMTP email server under System Settings à Emails 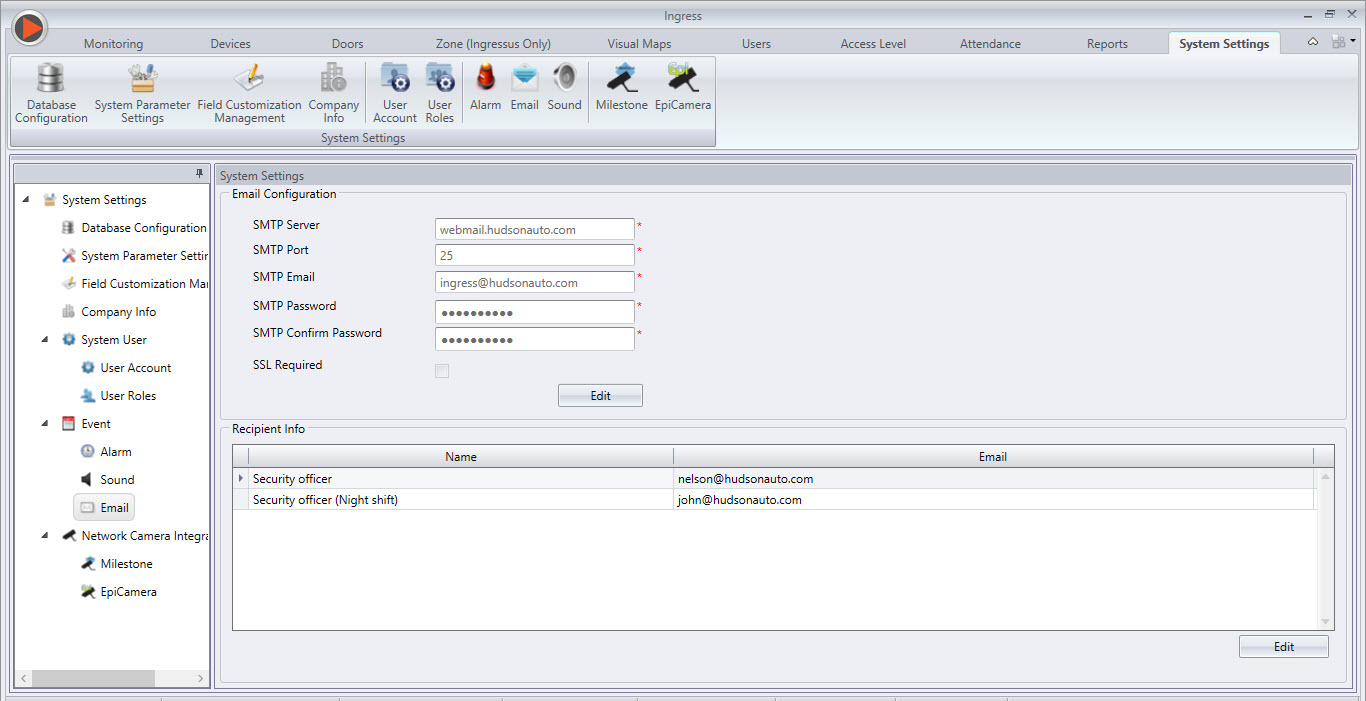 Click Edit under Recipient Info to create email addresses of recipients. OK to save.

Second, you will need to define the types of incident before system can send emails under System Settings à Alarm à Edit à Add 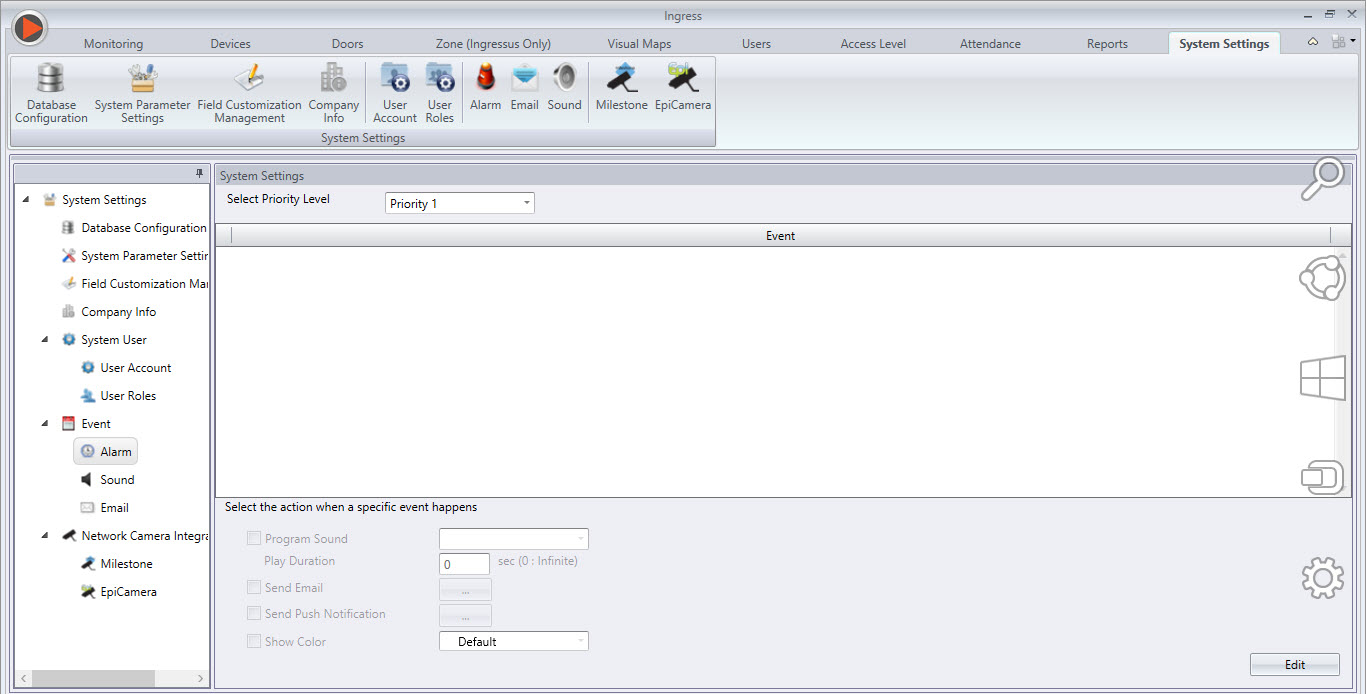 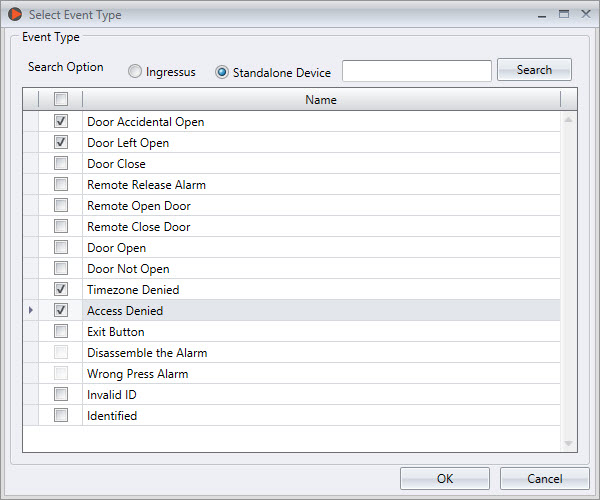 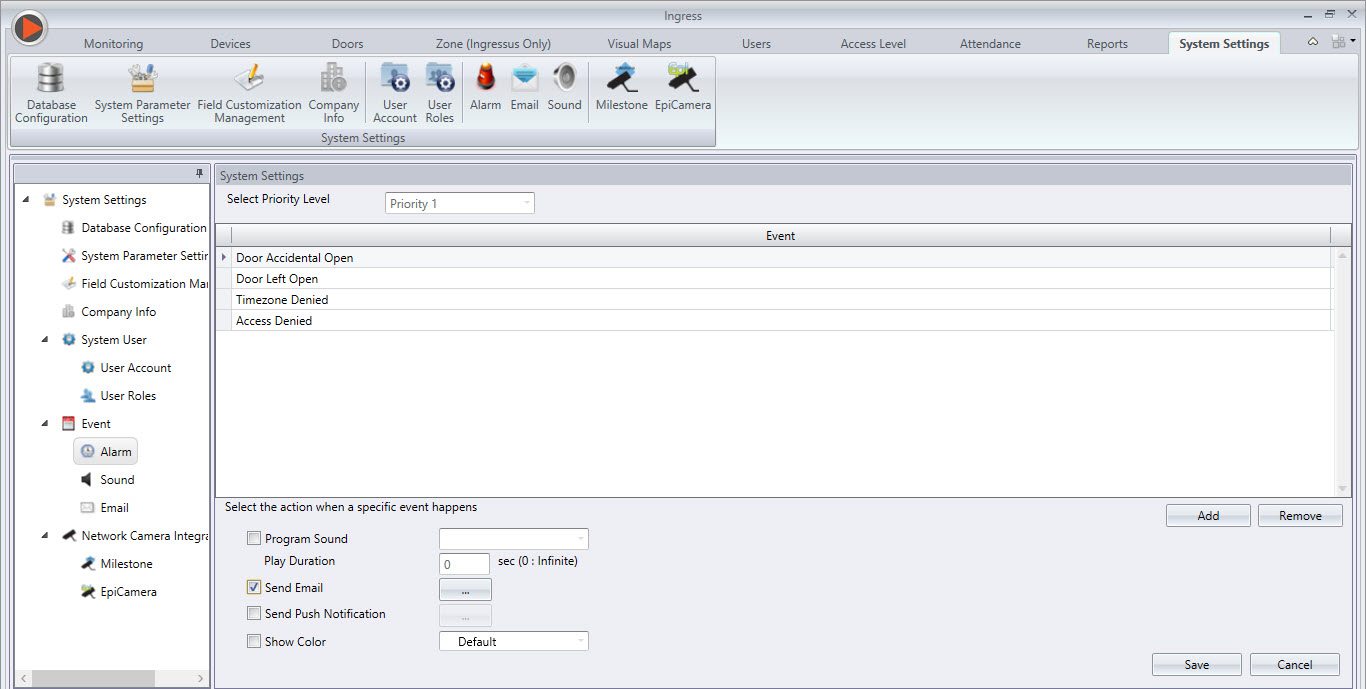 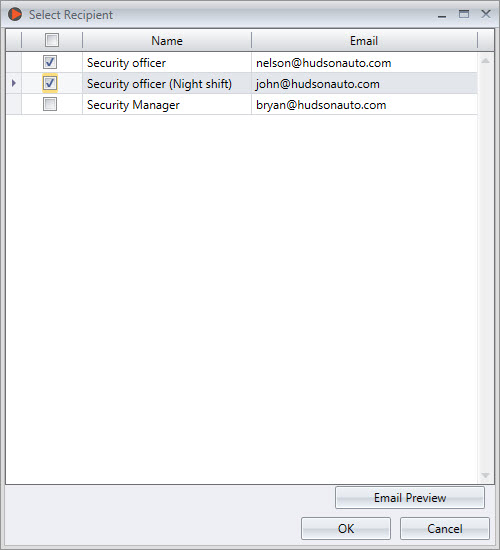 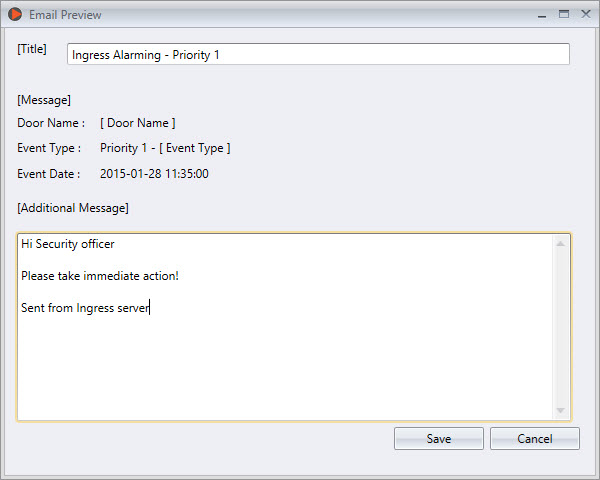 Activating the Close and Reverse State in Ingressus

Sometimes, the security of an office can be easily compromised if the door is not locked once it is closed. This situation can lead to unauthorized access and break-ins. However, the FingerTec’s Ingressus controller has a feature that can overcome this issue.

This feature that we are about to introduce is called “Close and Reverse State” which is used to lock the door once the door sensor detects that it has been closed. This feature will override the “Lock Open Duration” which has been pre-configured for a door.

How to Activate the Ingressus Close and Reverse State
To use this feature, you will simply need to use a door sensor that is linked up with Ingressus. To configure this feature in Ingress software, simply go to Doors > Select Door Name > Edit > Tick at 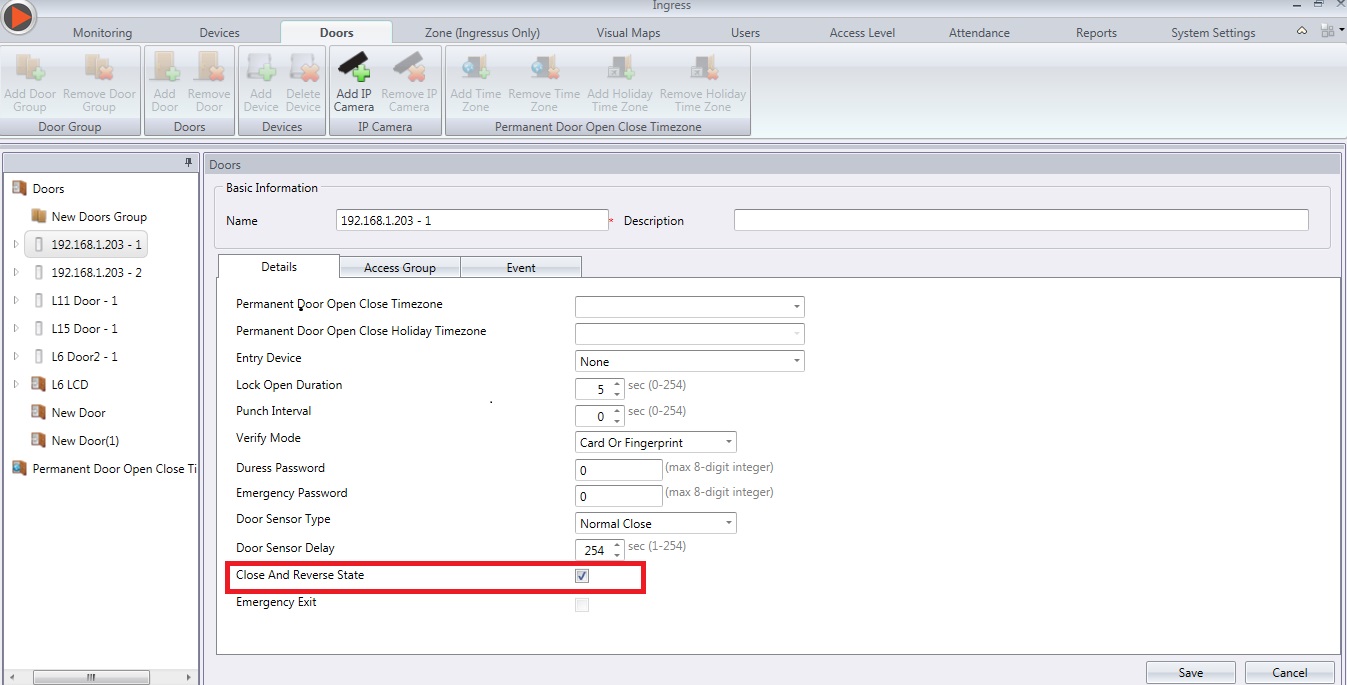 *Please note that this feature is only available for Ingressus controller.

The design of the server client concept is to separate the main program into multiple workstations to ease the logins and operations of the software without having to login from the main computer. The main program and database can be loaded in a server and the operation interface or so-called clients are installed into normal workstations.


Server and clients will interlink with each other on the TCP/IP network. Administrators and multiple system operators can log in anytime to operate the software from their own workstations.


There will be an instance when you are trying save the server settings from a different client workstation and encounter the error below. 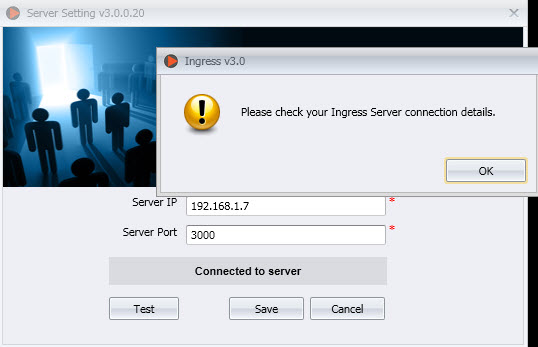 If you are unable to save the server settings after successfully connecting it to the server, do follow the steps below. You will only need to perform this at the SERVER workstation if you are using a different workstation for the client.
Go to Program Files (x86) > MySQL > MySQL Server 5.5 > Bin > select MySQLInstanceConfig.exe to check the setting of root access. 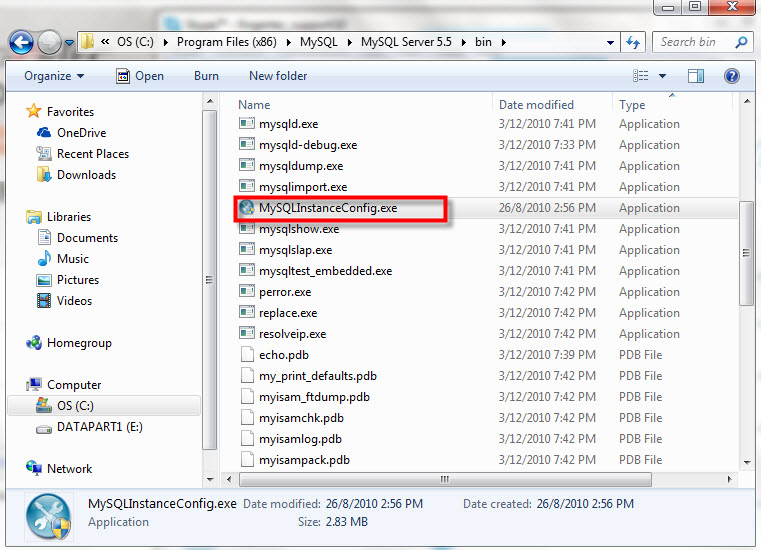 Make sure you 'tick' the Add firewall exception for this port as per the diagram below. 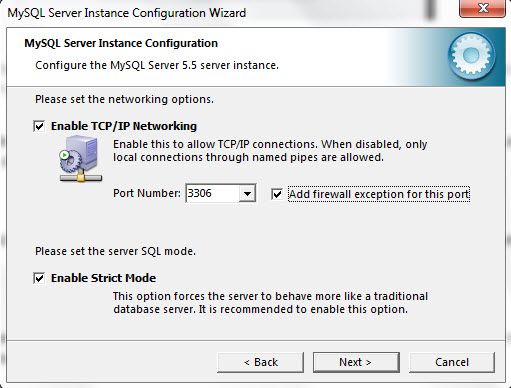 Alternatively, you can allow port 3306 in the firewall settings from the server computer. You can refer to the link below on the steps to allow the port 3306.

http://www.fingertectips.com/2013/12/step-to-setup-ingress-server-and.html
Once you have completed the above step you will be able to login from the client workstation with no error.