FingerTec provides regular firmware updates for our devices to enhance our existing features, and to fix some minor glitches that might have been found in each device. These updates are readily available for download for FingerTec Authorized Resellers at http://tips.fingertec.com/.

FingerTec has recently updated the Firmware Download page. Now, you can see the version of each firmware for each model in the Tips website.  With this new organization of the page, you will now be able to check the firmware version of your terminals before proceeding to download/update the firmware. 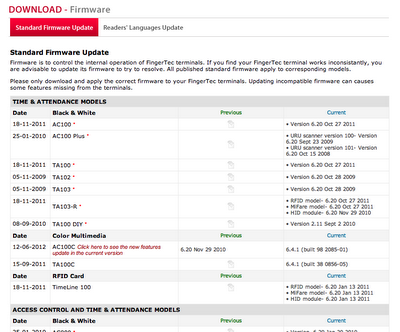 Contact support@fingertec.com if you are still unsure about how to proceed, or if you would like more information.

Initiated and Written by: Henry Pang

To use the OFIS-Y with the TCMS V2, you will need to update the Biokey.ocx file in the TCMS V2. To do so, follow the steps below:

Please note that you no longer be able to use TCMS V2 with the OFIS-X scanner after you perform the above steps. If you would like to switch to the OFIS-X scanner, you will need to uninstall and reinstall your software with the versions TCMS V2.2.022.


Initiated and Written by: Henry Pang

The FingerTec Data Processor version 1.6.7 is now ready for use. There are 2 new features in this release:

Feature 1 – Transfer Face Templates Among Face ID 2 and ID 3
You can now connect to your Face ID2 and Face ID3 to the FTDP V1.6.7. You will find the column Face when you are downloading/uploading users.

Feature 2 – Group Users by Department
You can now define departments under the FTDP and assign users to different departments. You can choose to sort by department during download/upload user process. 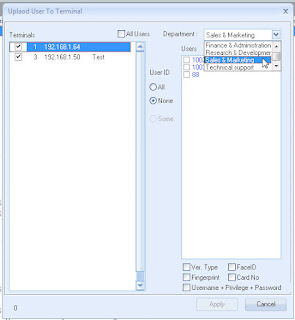